A Cooper Day: Fun with a Friend 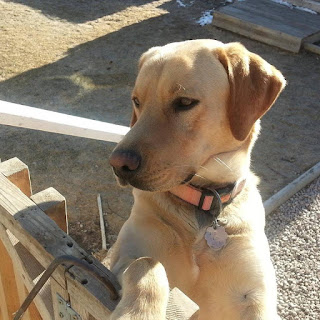 Cooper's our fun-loving Labrador retriever. He's full of energy and excitement...all the time. It's true that I have a blog just for Cooper called Cooper, the Water Dog, but I thought you may want to experience a little bit of him here on Inspirational Moments. After all, I think he's an amazing addition to our family and rather inspiring.

Every morning, Cooper wakes up with one thing on his mind, well, besides breakfast. Can you guess what it is? That's right. Fun.

Cooper makes a beeline for water, if it's around, the second he opens his eyes. That's why we call him Cooper, the Water Dog. But if no water is in sight, he plays with anything he can get his paws on. And I mean anything. Bottles, tennis balls, pillows, stuffed animals. Hey, I'm not joking! I've seen him reduce a 2 1/2 gallon water jug to smashed plastic in seconds. 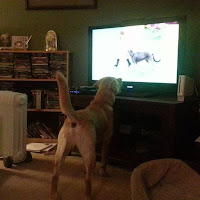 Let's put it this way. He's a pleasure and a challenge. The poor cat doesn't stand a chance, and as you can see, Poco (our old and grumpy Cocker spaniel) puts him in his place on a regular basis.


Cooper's in to everything but he does listen...well, most of the time. He can sit, stay, and even wave "hi" on command. He loves hot dogs and watching television especially when other dogs are on it. What can I say? He's a competitor. 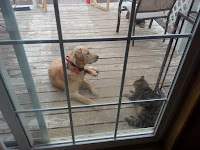 And then there's those pesky critters he has to share the house with. I already mentioned Poco and the cat, Shasta. Poco's the "old man" of the house and he gets a bit grouchy when Cooper runs all over the place. Now don't tell Poco this, but I think all this lively action's keeping the ol' boy young at heart. 😏 And Shasta? Well, she may not cuddle after I say this, but she's merely a hissing, spitting, irate, uh...toy. But she's still my cat and I love her.

If you're wondering what it's like to have a friend who loves water, television, and life in general, take a look at the following videos and pictures. You may decide you need a Cooper Day too. 😊

God bestows blessings through this pup each day. In fact, they're too many to count. The unconditional love, the uplifting joy...all from a four-legged friend we call Cooper.